The value of demand forecasting

Tourism demand forecasting, in most cases, focuses on tourist arrivals as an indication of demand. It is well known that tourism demand also exhibits different patterns according to seasonal and trend components. Nonetheless, in today’s digital world the majority of prospective guests/ travelers are planning their trips online. Therefore, the predictive power of internet searches is being explored more and more in order to estimate the number of visitors and their preferences while also collect behavioral indicators based on their online traces and actions.

In other words, online search queries reflect, quite accurately, persons’ preferences, thus providing comprehensive tourist information regarding a certain destination. In this light, Panadvert’s Data Analysis department conducted an extensive study primarily aiming to predict the upcoming demand for hotel bookings on the WebHotelier booking engine for a number of tourist destinations and top markets (countries).

To begin, we used past users’ queries for several travel destinations in Greece, and then segmented the queries according to users’ country of origin and per month. Once all data was organized in three year and twelve month periods (2015-2017 and January-December) we applied time series techniques for the analysis and used ARIMA (Auto Regression Integrated Moving Average) and Neural Network ARIMA models to forecast future values.

Following is the forecast and analysis for the island of Santorini (as a destination) along with the five most popular countries of origin of travelers visiting the island. The reason Santorini was selected is due to the large statistical sample available to us (23.483.039 queries for 398 properties).

The main outcomes of our analysis were the prediction of the demand for hotel services in total numbers, the seasonality of demand, how it varies from year to year as well as the rise of new markets/countries. We used search data from WebHotelier’s booking engine and then applied time series techniques to model the demand distribution for 2018. We then applied a k-means clustering technique to determine the highest demand season for each year and follow/ track any changes.

Finally, we performed a correlation analysis so as to discover if there is a linear connection between demand for hotel services and flight arrivals to Santorini. In an upcoming article, we will present this association with the help of a regression analysis, thus using hotel demand as an explanatory variable which can be used to forecast the arrival of travelers.

What’s in it for me?

To conclude, the major advantages of processing online data provided by search engines lie in the fact that they are real-time and highly sensitive to users’ fast-changing preferences.

Chart and Legend Explanation:A� The real values have been rescaled to a unit which is a portion of all years’ maximum value. The real values from search queries until December 2017, the forecast values for 2018, the Centered Moving Average (CMA) we used to detect the trend, and the linear trend we used as a benchmark for measuring trends, are all represented in the following charts. The data labels referring to months represent each year’s high demand season. 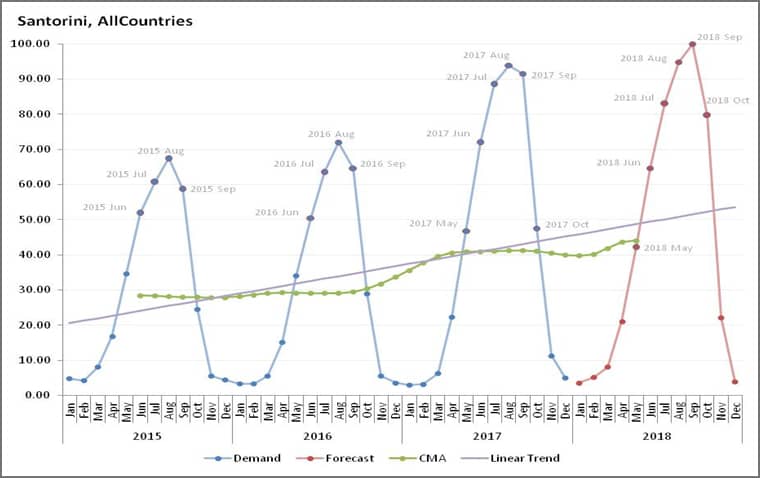 Analysis: We anticipate that the highest point of demand will shift from August (as it was in 2017) to September, in 2018. As we can see, August will remain at the same levels as 2017 while we are expecting a small decrease in July and June and a significant increase in September and October. From the above we can conclude that Santorini’s hotels are fully booked in August and thus, tourists begin to book their stays in September and October. Cluster analysis has revealed that the high demand season consists of six months starting from May and ending in October. The season’s duration was determined in 2017 and will remain the same in 2018. 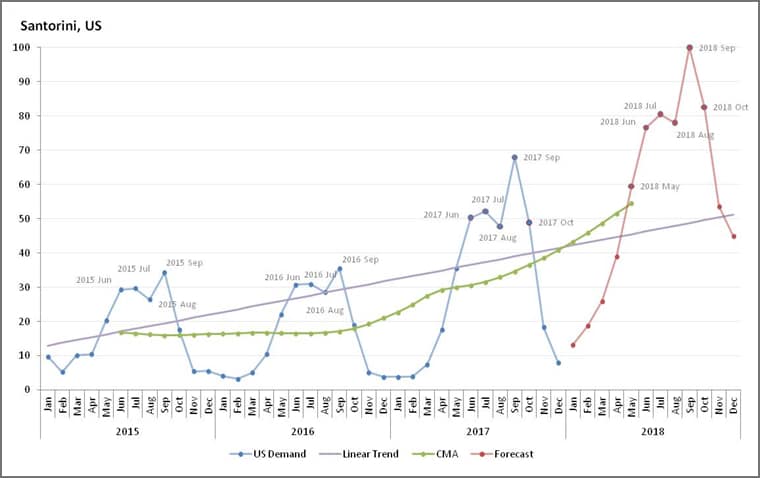 Analysis: The demand from the United States experienced a huge increase in 2017 signifying a strong upward trend. The 2018 demand pattern remains the same as it was in 2017. However, May has appeared in the high demand season which will be prolonged from five to six months. As indicated in the chart, tourists from the United States can be divided into two groups based on the chart: Those who prefer May, June or July (as a first choice) and those who choose between August, September and October (as their first choice). 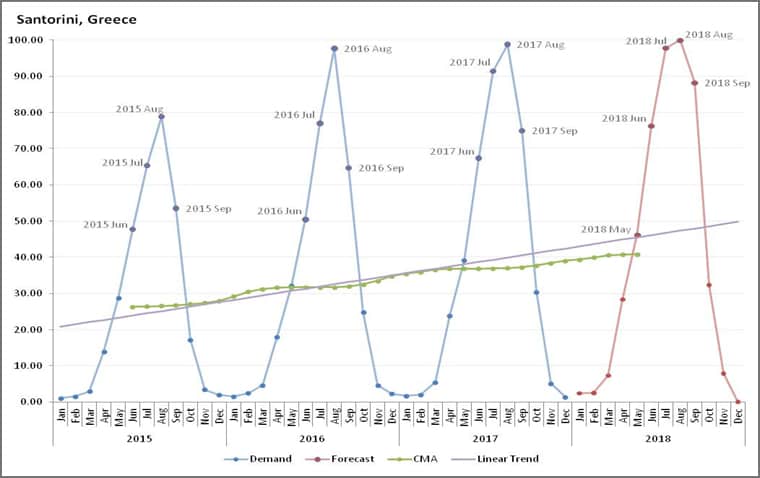 Analysis: Regarding native travelers we are experiencing an almost linear, upwards trend. Every year, the demand peaks in August. What is different about 2018 is that there seems to be a major increase in September while May has risen as a potentially high demand month. We can also observe that August remains at the same levels as last year which means availability is limited during that month and travelers tend to choose July and September. 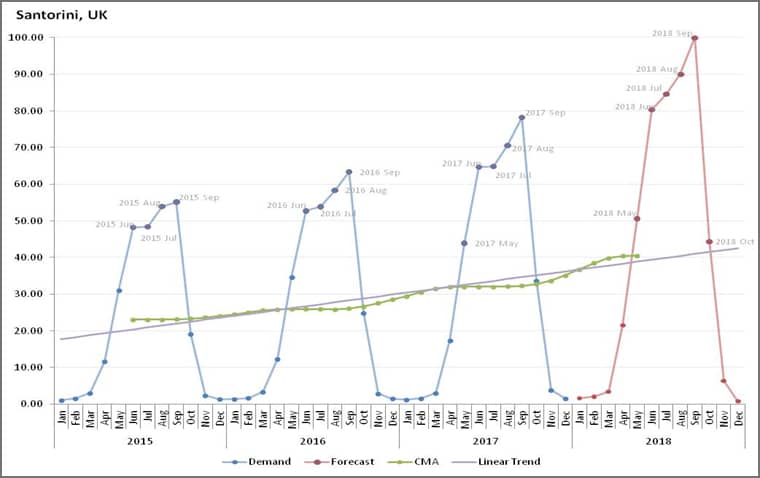 Analysis: As for travelers arriving from the United Kingdom, we are also experiencing an almost linear upward trend. October seems to rise in 2018 as a high demand month prolonging the tourist’s season duration from five (2017) to six months. September seems to be the top choice for British travelers with August, July and June following (in order of preference). 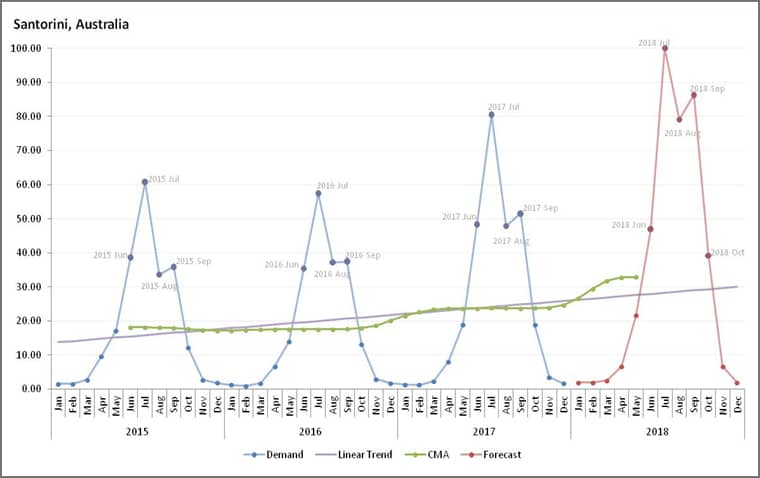 Analysis: Australian travelers’ top choices are first July, then September. October rises as an addition to the high demand tourist period and the demand pattern indicates that there seem to be two groups of travelers: one which prefers July and June and one which prefers September and August. The trend appears to be upward with July, August, September and October experiencing a significant increase. 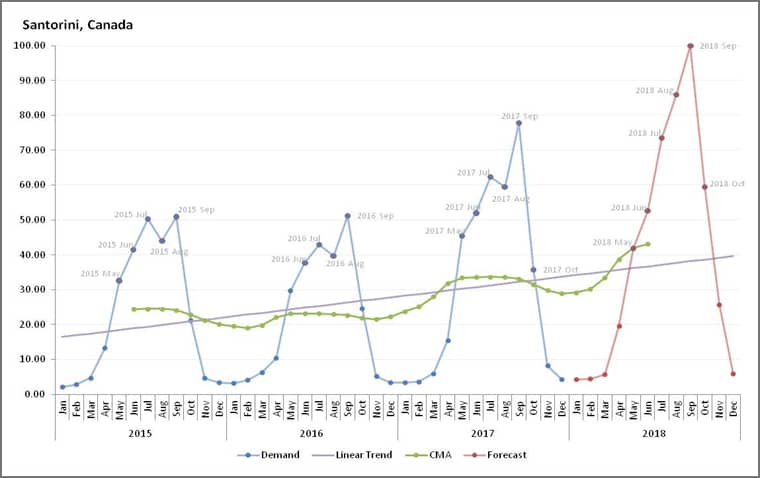 Analysis: The tourist period for Canadians traveling to Santorini seems to be the same as it was in 2017. August is experiencing a significant rise and is second in choice for 2018 (July, in 2017) while September remains at the top. The six months (May ‘ October) tourist period will experience significant increases following the strong upwards trend. 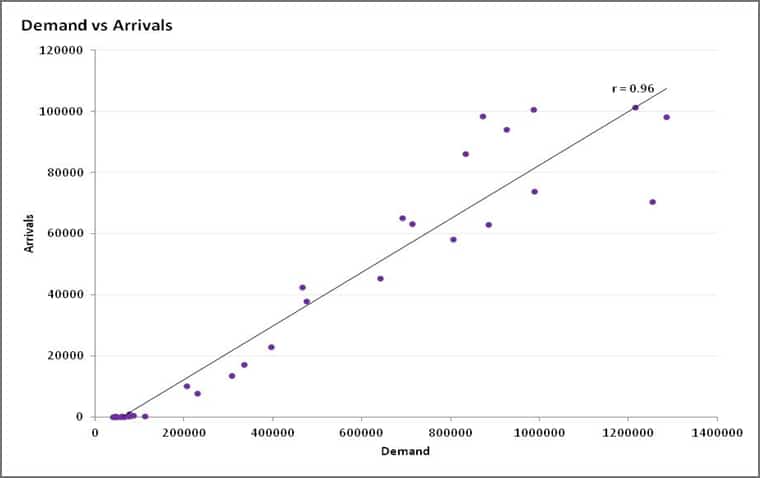 Analysis: We performed a correlation analysis between Demand data and data from Arrivals of foreigners at Santorini’s airport. The analysis indicates there is a strong positive linear relationship between the two variables.A� This means that flying is the main mode of transportation for those planning to book a hotel room in Santorini. For an upcoming article, we shall build a model with which we will predict the number of foreigners traveling to Santorini via airplane from the number of search queries.