How tourists’ online behavior can enhance marketing planning in 2021

Preparing for a new era in the Greek hospitality industry: How tourists’ online behavior can enhance marketing planning in 2021 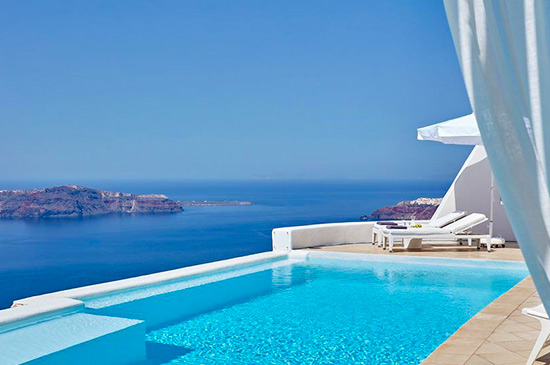 Few topics, if any, have been discussed as much this past year as the changes brought about in economies worldwide by the pandemic. While a handful of industries boomed due to these changes (courier services, online fitness, cloud-based technologies), most nearly collapsed. One of those sectors was undoubtedly tourism, even for world-renowned destinations like Greece. To call the Greek tourism sector’s struggles ‘unprecedented’ would surely be redundant – but, more importantly, it wouldn’t be constructive.

Almost a year into the pandemic, a more productive conversation to have is certainly how the sector can learn, adapt, and bounce back. This article gives an example of how this can be done, by identifying and analyzing behavior patterns in online users’ searches for hotels in Greece.

A good place to start is to compare the volume of hotel searches from Greece in 2020 compared to 2019.

For the purposes of this article, demand data was drawn from the search results of approximately 5800 hotels’ booking engines (using Webhotelier).

The below graph examines the top countries in terms of online demand for Greek hotels. It compares how many searches occurred in each of them this year from March – when the pandemic broke out in most of the Western world – till December, and compares these volumes to the same period of 2019.

Nobody is surprised to see that demand dropped in all of these countries (with the exception, perhaps, of domestic demand from Greece itself). Similarly, it was expected that the most dramatic drop can be seen in Italy, considering the notoriously devastating impact pandemic had there since springtime.

What is interesting to note, however, is that in 2020 searches are less evenly distributed across the months than in 2019. In other words, for most countries we see a steeper increase of online searches during the summer high season compared to the months leading up to it. This may be pointing to one of the findings of a recent research by McKinsey (2020), which highlighted that travelers are now booking last-minute holidays whenever the circumstances permit it, rather than planning ahead for standard holiday periods as they did in the past.

Trends in global online hotel searches for Greece in 2020

Another way to examine travelers’ online behavior is to zero in on more specific popular destinations within Greece.

Starting with Cyclades, we can again notice a drop in demand in the US, Australia, Canada, and especially Italy. However, domestic searches remained fairly steady, and even increased in August. In the UK, even though searches dropped this year in the months leading up to the summer, searches peaked higher than in 2019 for July and August, while Germany and France surprisingly searched for more hotels in Cyclades than last year in general.

Similarly, in the Dodecanese most of the demand continued to come from Greece, however the ‘last minute’ pattern is much more noticeable here. The most significant reductions in searches were in Italy and the US, while we see an increase from users in the UK. 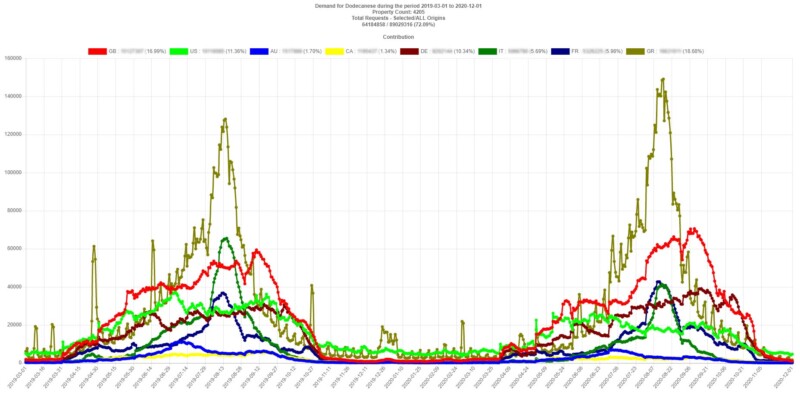 Crete shows some interesting results as, contrary to 2019 patterns, this year searches in the UK and Germany clearly surpassed domestic ones, Demand in France remained fairly steady, dropped slightly in the US, while Italy once again showed significant hesitation to explore travel options. 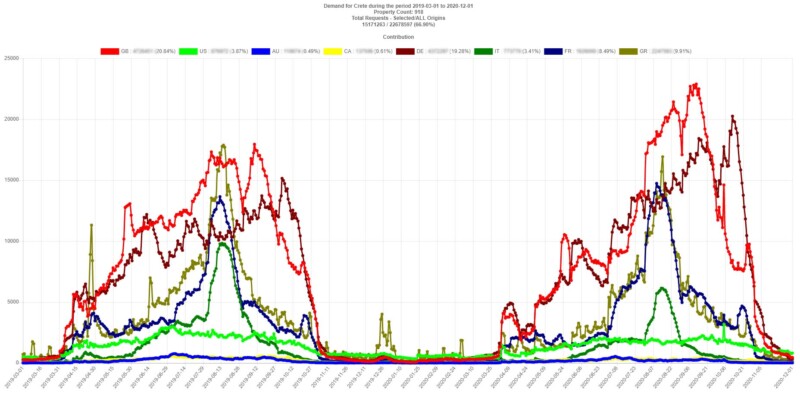 For Rhodes too, abroad searches remained at similar levels as last year (excluding Italy), however in this case domestic demand oddly dropped.

Finally, for Athens hotel searches from foreign countries were low – as they were in 2019 too – with a significant reduction in search volumes in the US. Reversely, searches from within Greece saw a huge increase not just in the summer, but also in the months before.

Online behavior of Greek hotel-seekers in 2020

The impression from the above graphs is that, overall, domestic travelers at the moment could potentially be a safer bet for the travel sector. Therefore, as the industry exits the winter season and enters springtime, typically depending heavier on domestic travel anyway, it is worth delving deeper into Greek travelers’ online behavior around popular domestic destinations irrespective of foreign tourists’.

Firstly, looking at domestic online searches for the country overall, we notice that searches following the summer season are higher than they were in 2019.

Daily domestic searches for hotels in Greece, for the period September 2019 – December 2020.

However, this general rule does not apply when we look specifically at Thessaloniki, where the volume of searches from September 2020 onwards is lower than last year.

Daily domestic searches for hotels in Thessaloniki, for the period September 2019 – December 2020.

For Athens, searches slightly rose in October compared to last year ‘s equivalent time, but then dropped – perhaps due to the virus spreading wider and wider, and the government starting to impose stricter measures again.

Daily domestic searches for hotels in Athens, for the period September 2019 – December 2020.

In Cyclades and Dodecanese, we see a comparative drop in October of 2020, however search traffic remained otherwise similar between the rest of the months of 2019 and 2020.

Daily domestic searches for hotels in the Dodecanese, for the period September 2019 – December 2020.

Daily domestic searches for hotels in Cyclades, for the period September 2019 – December 2020.

Similar to what we noticed about global search volumes, domestic searches for hotels in Crete maintained one of the healthiest levels as compared to 2019 data (with the exception of a drop in March, when the virus first broke out in Greece). 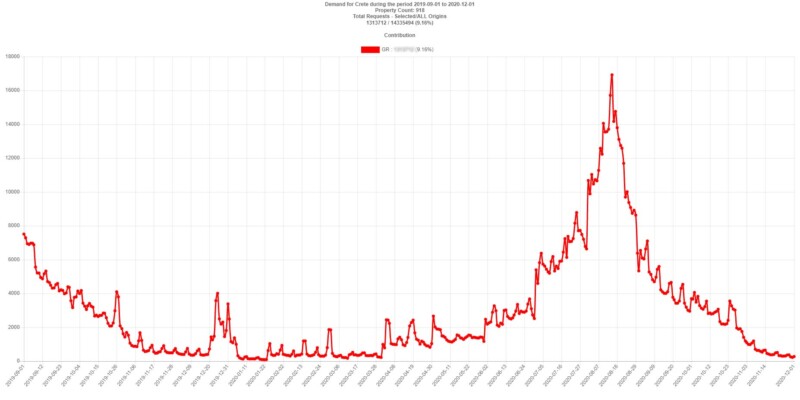 Daily domestic searches for hotels in Crete, for the period September 2019 – December 2020.

Finally, Volos is normally a well-visited autumn and winter destination for Greeks, however this year we see once again less online traffic than last year. Searches do seem to have picked up a bit in November, which once again could be an indication of the ‘last minute’ phenomenon as the time approaches for the Christmas holidays. 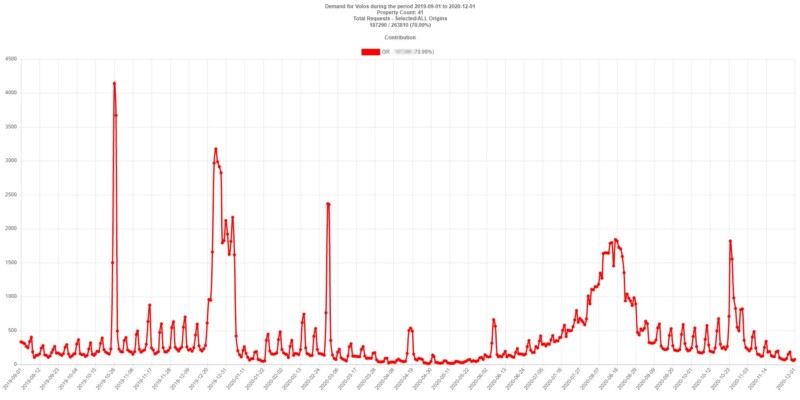 Daily domestic searches for hotels in Volos, for the period September 2019 – December 2020.

Takeaways for the Greek tourism sector in 2021

Circling back to the topic of constructive conversations, what can we learn from these behavioral insights? Firstly, it is important to clarify the following: as illustrated by the data in SETE’s October 2020 bulletin, hotel searches do not necessarily correspond to an equal volume of hotel bookings and therefore profits. However, they can inform the way the sector chooses to target their audience to increase those.

The first clear conclusion we can draw from the above data is that, for the most part, indeed tourists from both the foreign and domestic market tend to plan their trips closer to the time that they are actually meant to take place, rather than booking ahead of time for the high seasons of the year. One way hoteliers could potentially use this piece of information is, for example, by investing heavier on digital advertising, promotional offers and other marketing initiatives on an ad hoc basis when traffic in hotel booking sites and their own site seems to increase, as opposed to following a standardised promotional calendar designed in the past with high season bookings in mind. Another point we could infer is that, given that searches suddenly peak at a certain point in time rather than being distributed over the period of several months, the competition during that time will be higher than usual. This means that reacting to competitor moves will be more important than ever, while it could perhaps be worth considering a larger than usual investment in retargeting campaigns, in order to occupy as much of online users’ attention as possible during the time at which they’re considering making a booking.

Another pattern we observed is the shift in comparative levels of demand among the countries with the highest online search numbers for hotels in Greece. For example, Italy showed a consistent decrease in online searches for hotels this year compared to last, while the UK featured prominently in reports for almost all popular Greek destinations this summer. This could potentially point hotels towards targeting different audiences than they had done in the past, or at least target them to a different extent, to get a better return on their marketing investment.

Depending on where in Greece a certain hotel is found, the most suitable audience may vary (for example, Crete and Rhodes may want to invest heavier on the German market than Halkidiki).

Finally, it is fairly clear that even if details in their online behavior have changed, Greek tourists generally remain a reliable source of interest for the Greek tourist industry. Apart from possibly considering a different marketing budget split between their foreign and domestic audience targeting, what this insight may incline hotel owners to do in the proximate future is tailor their campaigns more to what may appeal to a Greek audience. This could include re-evaluating what is included in promotional packages, localised ad messaging and language, or similar. Possibly, hotel chains might also want to pay extra attention to their winter destination branches compared to last year, considering that the percentage of profit they expect from the domestic market can potentially be larger than usual.

Please note that the above are simply ideas that are meant to provoke productive conversation around how the tourist industry can adapt to new market demands, and should not be seen as formal findings or consultation to hotels for their marketing decisions in the coming period.

Despite the damage that Greek tourism had to suffer during 2020, almost all hotels are expected to reopen in the coming year. With news of vaccines being circulated soon, there is certainly room for some optimism around the economy in general as well as the travel industry in particular. Still, it remains to be seen whether demand will pick up again adequately to cover the financial needs of the vast number of hotels in Greece, and what the ‘new normal’ will look like in the next few years is still largely unclear. In the meantime, it is crucial for the industry to become  as agile as possible: to keep a watchful eye over the behavior of their commercial audience, read between the lines of their actions to understand what drives them, and adapt to these new data points as fast and as effectively as possible.